This year marks a big one for B.A.S.S. and I have been a big fan of Bassmasters for years. In fact, my daughter grew up knowing the names of all the superstars of bass fishing. She thought is was normal to kiss a bass every time you caught one (thank you Jimmy Houston!).

Someone sent me an interesting article written by Frank Miniter that is copied in part below. Enjoy!

This year B.A.S.S. aka the Bass Anglers Sportsman Society turns 50 …

For a half century this organization has gotten millions of people outside as it fought to clean up America’s waters and to restore healthy fish populations in streams and lakes across North America. As sportsmen have long done, they’ve accomplished real and practical things to improve the environment and to bring families together in wholesome outdoor recreation.

1. In 1968, when Ray Scott founded B.A.S.S., largemouth bass, which is the species these fishing tournaments are largely centered around, weren’t found in many of lakes and streams in western and eastern states. Interest fueled by these tournaments, and the economic impact of them, convinced states to stock bass. Now millions of anglers enjoy fishing for bass from coast to coast and in Hawaii.

2. In 1970 B.A.S.S.’s conservation movement took 250 water-polluting companies to court for allegedly violating the seldom-used Federal Refuse Acts of 1899. This resulted in many waterways being cleaned up.

3. In 1972 B.A.S.S. introduced catch-and-release fishing in its tournaments. This lead to the “Don’t Kill Your Catch” initiative. The ethic caught on and today the vast majority of bass anglers release all or most of the fish they catch. Catch-and-release bass fishing is now credited with maintaining quality fishing in aging reservoirs and highly pressured fisheries.

4. In 1976 Ray Scott was appointed to the U.S. Coast Guard Boating Safety Advisory Council. Scott used this post to lobby for safety reforms, such as positive upright and level floatation in boats. The Coast Guard adopted the recommendations and they were passed into federal law.

5. In 1982 B.A.S.S. launched its “Acid Rain Burns My Bass” campaign to raise public awareness of the dangers of acid rain to the nation’s fisheries.

6. In 1984, with mixed support from the marine industry, B.A.S.S. lobbied successfully for Congress to pass the Wallop-Breaux Amendment, an expansion of the federal Dingell-Johnson Act, that helped push billions of dollars to state fisheries and for clean-water efforts.

7. In 1990 B.A.S.S. hosted 13 leading scientists in the fields of water quality, fisheries and aquatic environment at the B.A.S.S. Living Waters Symposium. Findings formed the basis for the first “Living Waters,” local initiatives that build grassroots support to protect fisheries.

8. In 1991, to get more kids outside, B.A.S.S. created the “Casting Kids” program. It impacted millions of kids before it was transformed into the current B.A.S.S. High School program, which is seeing record growth in participation.

9. In 2004 the first ever Bassmaster Junior World Championship is held in conjunction with the Bassmaster Classic with 11-14 and 15-17-age divisions.

The positive impact all of this has on our waterways and on our nation’s youth is hard to quantify, but it nevertheless shouldn’t be overlooked.

Will your son or daughter or grandchild have a good time? 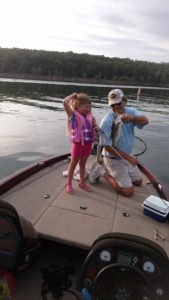